After I found exactly zero examples for the great MonoMac library (create OS X Mac applications in C# without the need to install Mono separately on a Mac) on how to do localization of Xcode Interface Builder XIB files, I found one discussion about that topic. With some help of the original poster Florian, I was able to bring up a solution that worked for me.

I’ve assembled an example project that you may download as a ZIP file.

While I found plenty of examples/postings on how to do localization of pure strings (through the „Localizable.strings“ files), I found none on how to do it with whole XIB files. 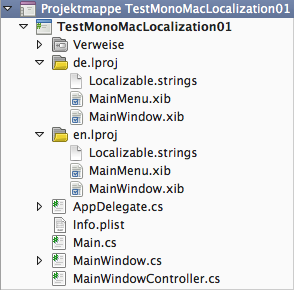 Instead, I moved all XIB files that need to be localized/translated into the „en.lproj“ folder. I also placed the strings file „Localizable.strings“ into this folder. Since I need the files for German, too, I copied them to the „de.lproj“ folder, too. Next, I double clicked the XIB files in the German folder, which launched them inside Interface Builder. I then translated them graphically inside Interface Builder, saved, switched back to Mono and was done.

After compiling the application and starting, it showed my correctly a German UI (since my Mac has the German language active) for the main menu, the elements on the main window and also the label was correctly set to the text read from the German „Localizable.strings“ file.

Things to keep in mind:

I’m really happy for any feedback you have for me!